Things will always go awry regardless of our best efforts, we can only do our best to anticipate and make provisions, as rationally as we can manage. – Ted

Ted has been asked to comment regarding the recent abandoning of a 42-foot catamaran and subsequent helicopter rescue of the crew 300-miles off the coast of Virginia. Here is a crew member’s own description of events: Helicopter Evacuation: Abandoning Be Good Too.

Eric: I’m sure you have seen this but can you please comment.

Ted: The boat appears to have greatly undersized rudder stocks, especially as it also has free swinging rudders (no skegs). The Antares stocks (2-3/8″ diameter pipe) are only possible with the use of the heel fitting bearing. If the rudders were free swinging, the stocks would have to be significantly heavier. 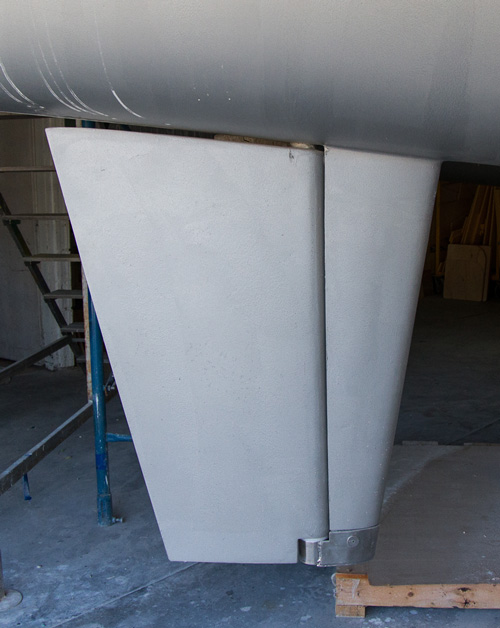 In reverse, the loads on the stocks and steering gear is greatly increased beyond anything normal to turning the boat; water pressure tries to swing the rudders broadside with increasing force rather than trying to trail them. Everyone will have felt the kind of excessive steering loads that occur when going astern, perhaps have had the wheel or tiller jerked out of their hands? – bringing the rudder up hard against the stops with a clunk.

The swing limit has to be robust (in the Antares case this is the welded rudder stops on the back of the gearbox). The standards for all this stuff are no secret, being detailed in naval architecture codes and the ISO (CE) standards for offshore boats, (all boats for that matter).

In the case under discussion, the real issue is not the stock size, but the inadequate tiller connection and/or steering gear which were unable to prevent the rudders from going past the intended angle limit and ending up broadside on, putting the assembly in extraordinary loading.

Though it may appear to be somewhat lean, the stock and rudder construction would likely never have been an issue in the life of the vessel, had the tiller arm been a proper fabrication. The tiller arms that failed are cheap and nasty fabrications with insufficient clamping contact, despite the wasted weight of stainless steel slabs used. It is the clamping effort that accomplishes the work; through-bolts are a safety and should never be expected to assume the torque load as they are not `fitted`and will gaul or shear. Set screws are ineffective. The arrangement that failed displays an engineering/design misconception apparently shared by the crew intuitively. (see photo posted in: Helicopter Evacuation: Abandoning Be Good Too.)

The saloon windows are well beyond the size that would accept 3/8″ acrylic or glass and still meet the ISO standard for Offshore ‘A’. They may be yet heavier material but there is a practical limit. I think the crew was very fortunate that they didn’t lose the windows entirely. Bizarrely, windows are commonly sucked off their frames rather than being stove in, maybe that explains the perimeter leaks?

The transom step appears to have been retained by four wood screws so its having been swept away is no mystery.

The electrical failures have no explanation but you have to think that some kind of automation in the charging circuits (charge combiner) may have saved the crew a lot of hand wringing at a time when other issues to be addressed abounded (like survival).

You will notice that some of the comments posted relate to recovering the vessel – Huh? What for? I guess the photos of the abandoned vessel don’t look much different than the marketing pics; ‘How do I look?’ Cool.

I find it revealing that in this case, there is an innate assumption of entitlement to rescue, even if it involves a massive expenditure of resources. Perhaps this assumption explains the peculiar purchase decisions that prevail, and in turn permit the horrors of design and construction that abound.

Things will always go awry regardless of our best efforts, we can only do our best to anticipate and make provisions, as rationally as we can manage.