Ted Clements, head of design at Antares Catamarans is constantly thinking about hull shapes, sheer lines and weight distribution. It is ultimately the obligation of the designer to take care of the customers, even if it means tempering some of their design ideas.

Catamaran design came naturally to Ted. Two saturated logs found on shore, some salvaged boards for a bridgedeck, a shower curtain for propulsion and a wooden crate for a seat, solved a lot of the initial stability issues when designing his first vessel at his childhood cottage. 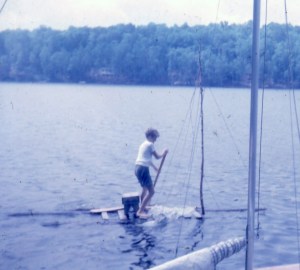 Ted’s career started nearly 35 years ago when he answered a small help wanted ad for a marine mechanic position at the Royal Canadian Yacht Club. While the RCYC had a well-equipped marine yard, Ted quickly discovered that he was “it” – in other words, the only person with technical knowledge in the yard. He had to become the expert in the mechanical field, servicing everything from converted antique steam ferry boats from the 1800’s to vintage Alden ketches complete with teak decks and oval cockpits.

Ted later joined a group of partners and established a repair and construction facility that worked on major reconstructions and bare hull outfitting. Harbour Marine was later purchased by C&C Yachts and became their repair division.

Ted was involved in major contracts for the rebuild and refit of commercial and government vessels. One of the ongoing projects was a new construction contract to built a series of hydrographic launches of the Nelson 34 pilot boat design. This project expanded to supply other launches of various sizes.

Ted’s exposure to designing and building limited production boats gave him lots of experience in refits to coast guard approved passenger vessels by using a reverse process to create a new design, exposing him to stability requirements not traditionally encountered on pleasure boats.

A later project involved engineering work for a prototype Arun-class roll-over lifeboat for the Canadian Coast Guard. These boats were to be built out of aluminum and required new propulsion systems, deck layout, hardware and interior fit-out. Ted engineered the fuel/exhaust system details that would keep the engine running safely in the event of a roll over in severe seas.

Ted has worked both sides of the fence. He was exposed to catamarans in the 80’s when C & C was involved in the development of a production catamaran for the North American market. Although that project was perhaps before its time and somewhat misguided, later developments have proven the catamaran concept to be a sound one. As far as functionality and performance, it is very difficult to argue with the catamaran hull shape.

In the late 90s, Ted was hired to investigate the feasibility of producing a trawler-type power catamaran using an existing 32-foot sailboat hull for PDQ Yachts. He developed the modification in the existing hull form to achieve a target of 12-knots with 2 x 55 hp engines. The prototype fulfilled the requirement, and actually reached 18 knots. This lead to the construction of dedicated molds for a 34-foot power cat. Ted had ultimately designed the most fuel efficient trawler in its class. In fact, Ted has achieved amongst the most efficient catamaran hull designs in the trawler market.

At that time, affordable 3-D modeling software was still being developed and Ted began working with a beta version of Rhino. The calculations and mathematics incorporated in the software made it apparent that a computer database was the way of the future. Comprehensive vessel design that at one time took 6 people to design could now be done by one person.

When designing hull forms it always pays to observe what has worked historically. When designing a 41-foot power catamaran, for example, Ted paid particular attention to older, narrow entry, semi-displacement hull forms. The result – a dry, quick vessel that didn’t require the complication of spray rails. The 41-foot trawler boasted cruising speeds of 17-18 knots with a burn of 10-11 gallons an hour.

Ted began the design work on the 42-foot predecessor to the Antares 44 in 2000. This design was a collaborative effort building on PDQ’s experience in sailing catamarans and considerable input from a strong owner base who gave invaluable field reports.

Ted’s believes that ultimately the designer is obliged to temper some marketing driven ideas, such as an exposed helm position which can be treacherous when enduring the hardships of being in weather, or curved cabin tops that are difficult to maneuver around. As Ted explains, the functional line has a proper place in the marine field. You should be constantly concerned about ergonomic and usability issues, both inside and outside the vessel. The standards in the construction and design of the Antares are a result of a long history amalgamating the requirements of working vessels with pleasing aesthetics.