The vessel in the photograph was Ted’s first design/build project (circa 1962) and served to inform all his future work in the marine field. Many years in advance of the 100 mile diet theory Ted elected to use nothing but materials readily at hand, indeed the two timbers that were to become the hulls of this catamaran delivered themselves on the drift right past the builder’s yard. These “logs” were well seasoned, having been felled some 30 years earlier and left to pickle in the cool lake waters. 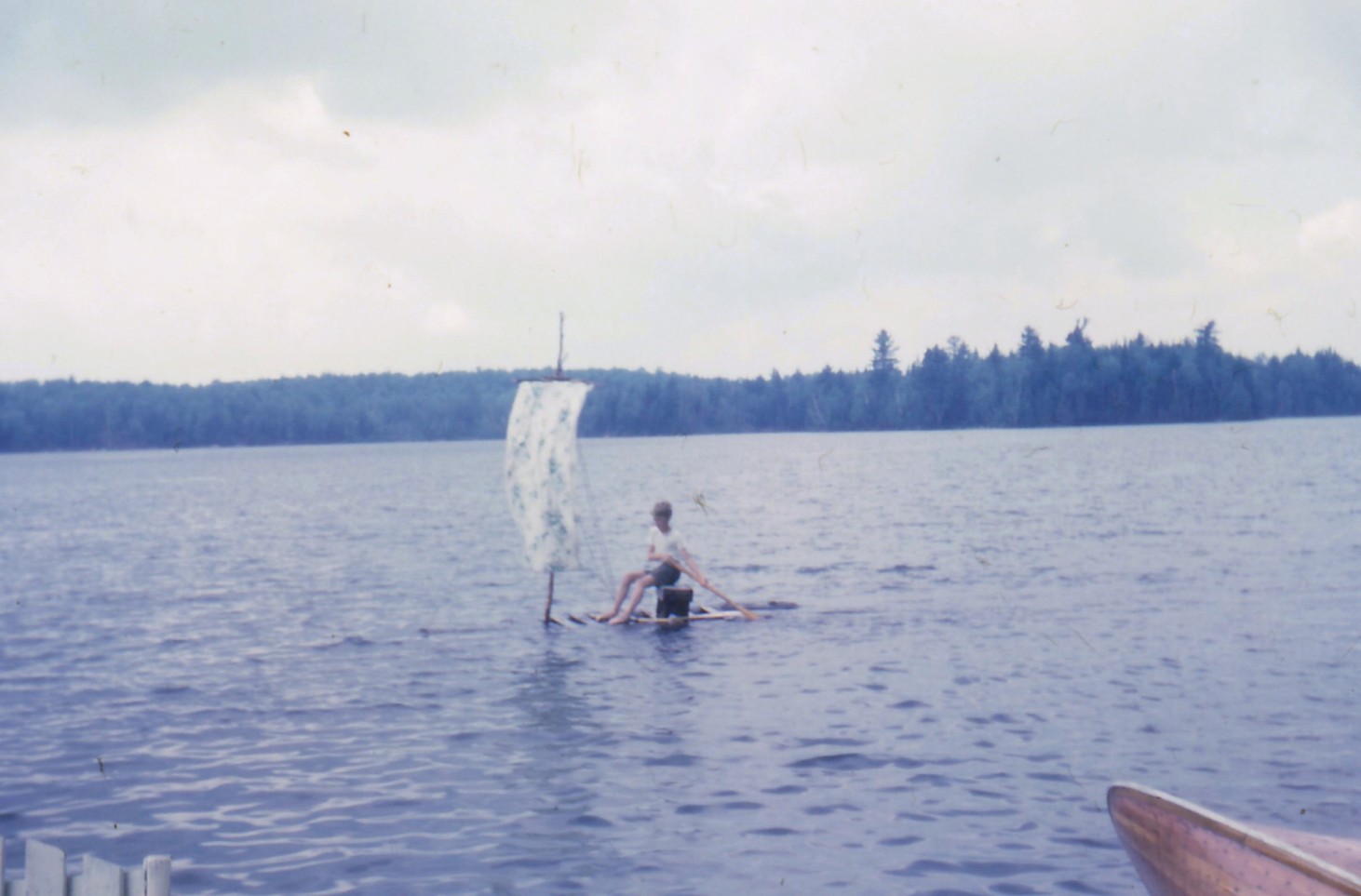 During their extensive travels at the vagaries of wind and current, nature shaped and streamlined these future hulls to her own design with a length to beam ratio in excess even of the desired 12:1 minimum and beautiful bow and stern profiles. In demonstration of their affinity for the water, the hulls were assimilating themselves with the medium and showing less freeboard than may be desirable in a perfect world, but there was still sufficient buoyancy offered to support a small crew allotment of skipper and possibly a skippers little sister, provide the weight distribution was carefully observed.

The building site being rather remote, it was necessary to acquire crossbeam material from what was readily at hand. Fortunately, some beautiful floor board timbers happened to have been temporarily removed from the dingy built the season past by the previous generation of this boat building family, and they would not be missed for at least a week or so. In a spirit of re-use / recycle that was well ahead of his time, Ted was able to withdraw a sufficient number of surplus fasteners from various nearby dock and residential structures to secure the multiple cross beams between the two hulls.

The next step was to survey the nearby stand of fine timber to locate a suitable trunk from which to fashion a main spar. Once located, the tree selected, already partially felled by the local population of beavers, was dropped and barked. Ted used all the traditional hand tools to be found in a fold-out camper knife of that pre-Swiss era, safety dull knife, fork, spoon, bottle opener, can opener, to accomplish this task and many others associated with this work of craftsmanship. Fortunately, a suitable yardarm was already available, the selected spar having already served as the hub for a roll-up blind; the extraneous end fittings, spring loaded axles and ferrules, being left in place to lend a sense of purposeful style to the finished rig.

The standing and running rigging were successfully set up using cordage that had been conveniently strung between some local trees, the assembly occasionally serving as a largely unnecessary clothesline. The square rig having been decided upon as the most romantic, Ted now had to locate a suitable sail.

Although there were several possibly suitable spans of heavy canvas locally available for use as temporary shelter or boat covers, they were identified as being rather too heavy for a light weight craft and possibly would be less suitable for their original function if cut down to suit the required sailplan. Fortunately, an unused square of material complete with graphics and in ideal dimension, already fitted with cringles and even hoops should they be needed, was readily available. This material had been purchased to serve as a curtain for a hypothetical outdoor shower, yet to be built, and therefore subject to no immediate demand, it being summer.

The only remaining fit-out needed was a proper helm position with ready access to the steering gear and all sail handling lines. This purpose was fulfilled by the installation of a bench that had at one time served as a shoe polishing station and was therefore fitted with a handy storage locker.

The steering system itself demonstrated a fine knowledge of historic ship construction techniques and consisted of a simple oar with thole pins and lashing secured between the hulls on the aft cross beam. The oar itself had at one time served as a canoe paddle, but it was one of many to be casually found around the builder’s yard.

The photograph demonstrates the fine performance of the finished vessel. In spite of its obvious success, here recorded by the builder’s proud mother for posterity, it must be pointed out that some improvements to the design would likely be forthcoming in future projects.

This pioneering project was undertaken at an age when Ted would “dare all” and risk the criticisms and doubts of those around him of lesser imagination and vision in order to explore the boundaries of boat building possibility in the spirit of all the great sea-faring men of history that had gone before and whose sacrifices have made recreational boating the safe and sober activity that we all enjoy.